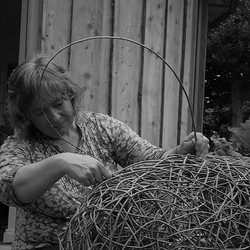 Yeoman of the Worshipful Company of Basketmakers

Licentiate of the Society of Designer Craftsmen

Caroline took quite an unusual route into her art career having initially worked for several years as a professional Electronics Engineer. This role took her into such diverse environments as power stations and operating theatres.

After the birth of her son she started persuing her love of gardening with renewed vigour. It was a chance viewing on BBC2’s Gardeners World, of Alan Titchmarsh making some plant supports, that sparked her interest in willow. She signed up to do a weekend willow basketmaking workshop and the rest, as they say, is history!

Over time Caroline’s interest moved away from the functional toward a concentration on form. When her son started school she decided to study Design Crafts at Glydwr University, Wrexham. Although there was no basketry element on the course Caroline managed to introduce the techniques and materials at every opportunity, much to the amusement of her fellow students and tutors.

On graduation, her work was noticed at the New Designers exhibition in London by The Society of Designer Craftsmen and she was invited to become a Licentiate Member.

It wasn’t long before her enthusiasm and skill in teaching was recognised and she started tutoring basketry at The University of Huddersfield’s Textiles Department. This success led to further tutoring opportunities at West Cheshire College in Chester and to Caroline gaining C&G Level 4 qualifications in FE Teaching.

Caroline served for several years on the Executive Committee of The Basketmakers' Association with particular responsibility for the Association’s tuition.

The excellence of Caroline’s work has been recognised by The Worshipful Company of Basketmakers, one of the trade companies of the City of London and since 2010 she is honoured to be a Yeoman of the Company.

For more information about recent and future exhibitions look in my Blog pages.